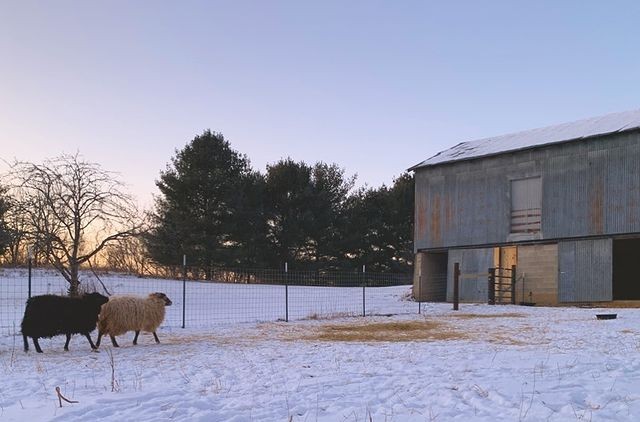 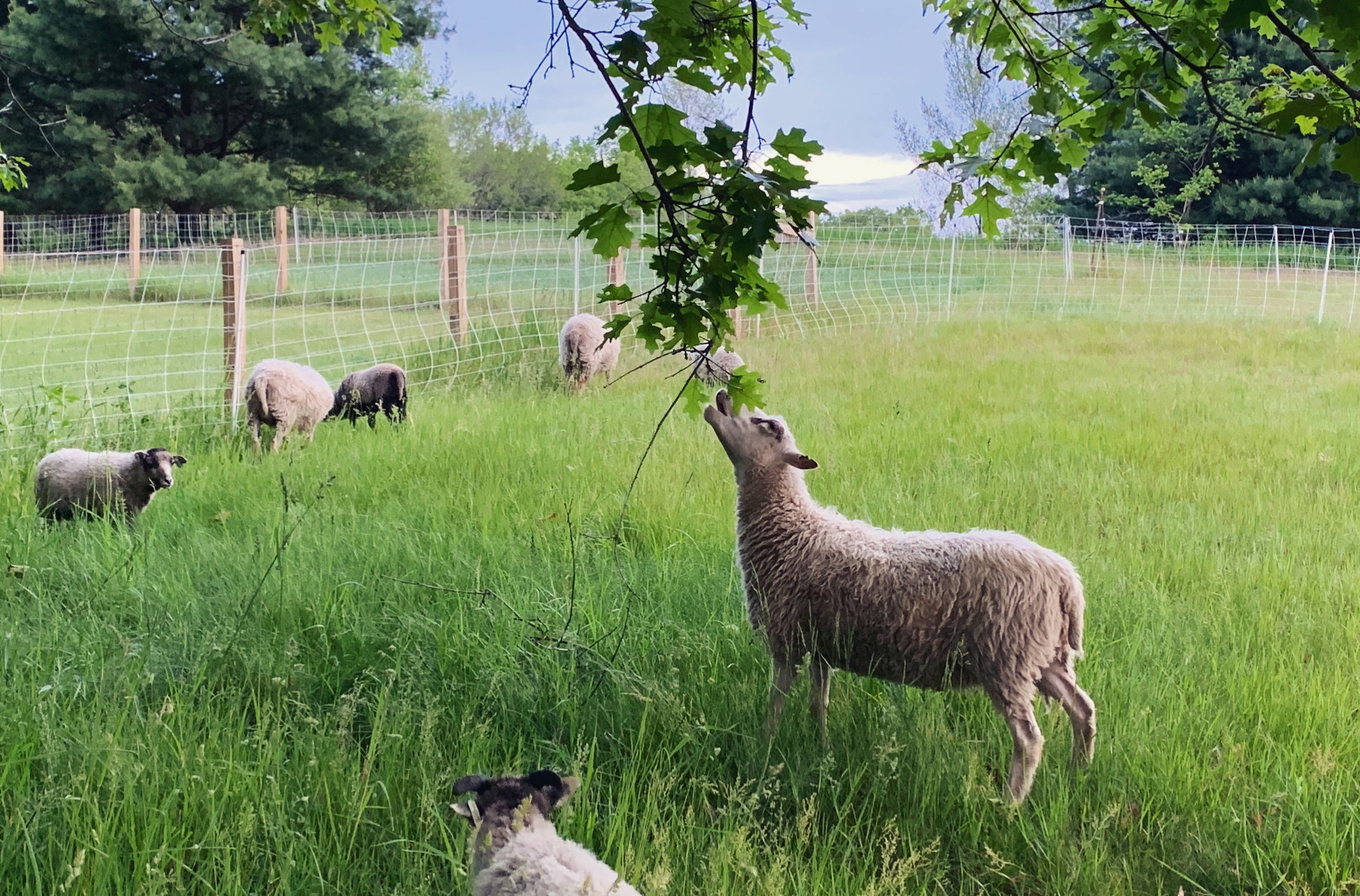 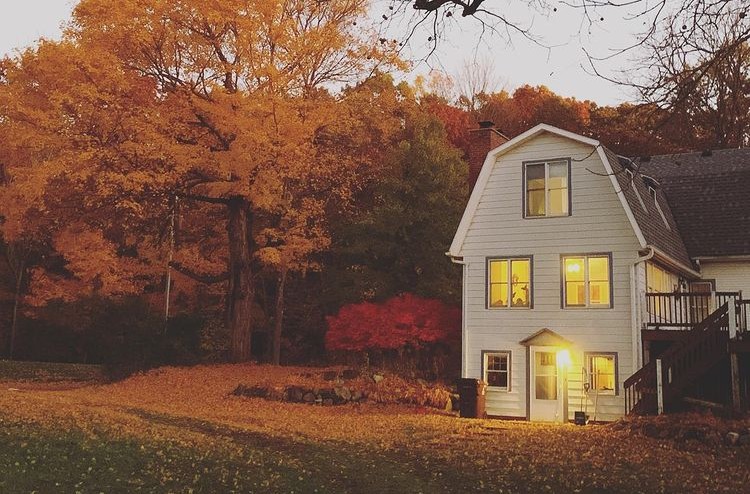 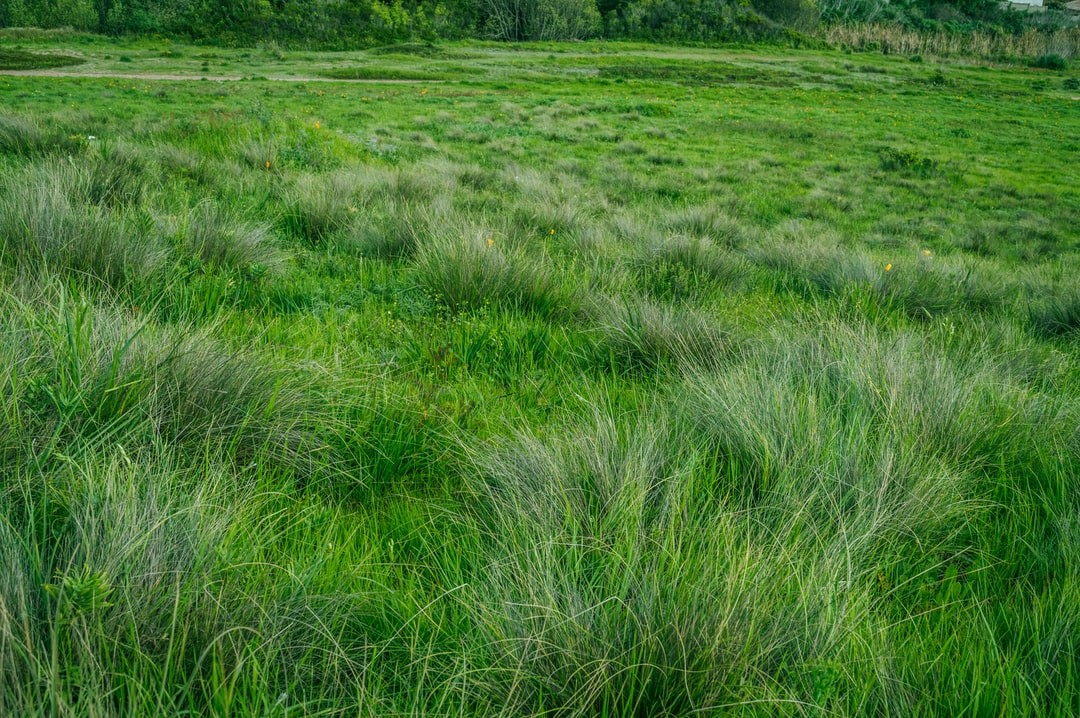 We started out with a small flock of four Shetland ewes and the goal of raising a few good sheep to make some nice, hand-processed yarn for owner Carrie and the local fiber community in Chelsea, Michigan.

In 2020, we quickly realized we had more wool than we could process by hand. We wanted to keep things relatively local, so we sent the wool to Round Barn Fiber Mill in Illinois to be processed into roving and yarn, and got to work growing more wool! We expanded the flock with the aim of producing meat and eggs as well as wool, and added chickens and ducks to the operation.

We’re a very small farm—only three acres—so we have to be very careful and intentional about how we farm. We aim to make the most of our space in a way that improves the land. At Bellwether Farm we’re focused on quality, not quantity. We know we’ll never be large producers on just a few acres, but we think we can grow the best possible fibers and foods for our community.

We believe regenerative agricultural methods are key to getting the most out of the land while leaving it better than we found it. We use a rotational grazing technique called adaptive multi-paddock (AMP) grazing that is better for the land and the livestock than traditional grazing methods.

In 2021, we experimented with cover cropping. We've had success using fall cover crops to extend our grazing season well into November.

For 2022, we tried our hand at polyculture and planted permanent raspberry beds with rows for crops in between. We had success with garlic, tomatoes, and pumpkins.

Further into the future, we’re also trying to add native produce to the mix. We planted native, locally-adapted pawpaws, ramps, and American Chestnuts in 2021, and we are hoping to be producing those for local customers within five years. These crops take time to establish, so we’re trying to be patient. We look forward to pushing the possibilities of what can be produced on a three acre farm.

It's all about the grass

Growing wool is all about growing grass…and clover, and alfalfa, and other leafy green things. In our AMP system, the sheep graze very small sections of pasture for 12-24 hours until they are moved to the next section. The chickens follow the sheep in turn, foraging and fertilizing as they go. By keeping each grazing brief, we prevent overgrazing and soil compaction from hoof traffic. This cycle means we can go months between grazing the same patch of pasture, allowing the grass plenty of time to recover and grow. As an added bonus, it cuts off the life cycle of parasitic worms, which means our sheep need dramatically less dewormer.

AMP grazing isn’t just great for livestock and soil, it’s also great for the atmosphere! Studies show that ruminants (like sheep) grazed in AMP systems actually trap more carbon in the soil than they release into the atmosphere, and Project Drawdown has identified AMP grazing as an essential part of mitigating climate change. 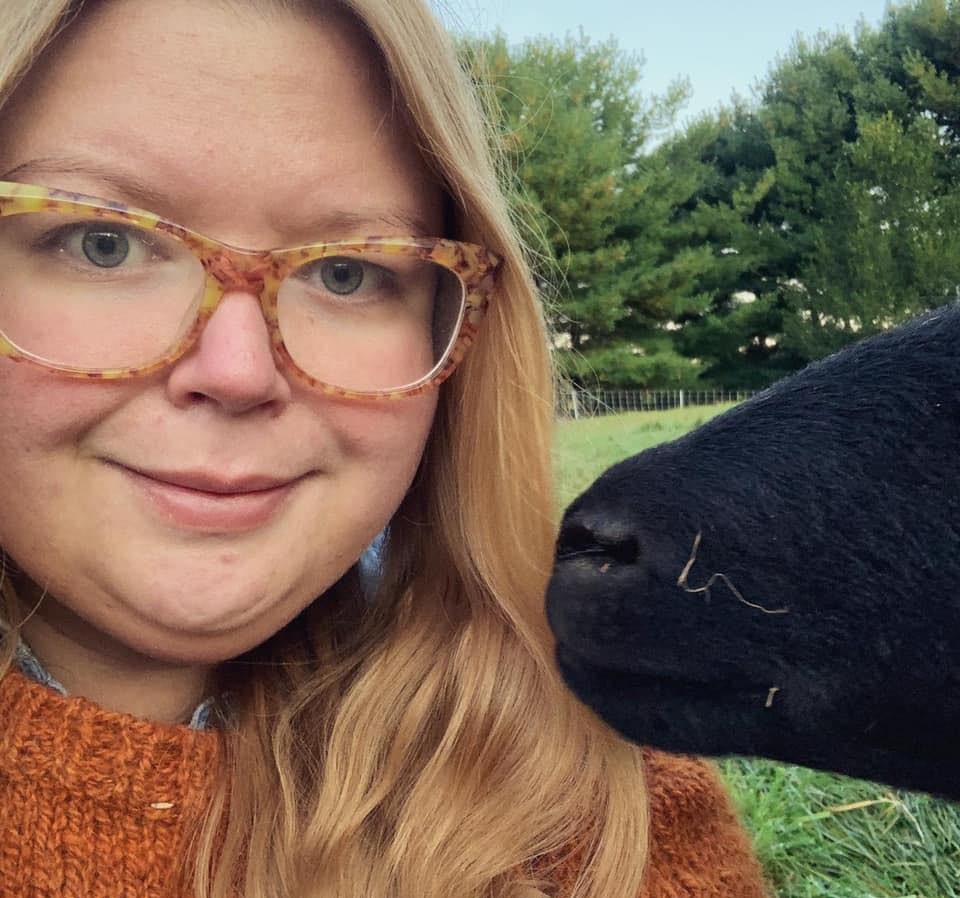 Hi, I’m Carrie Wold! I'm the owner here at Bellwether Farm, where I wear many hats: Shepherd, fiber artist, chicken chaser, hay hauler, and duck wrangler, among many others. I strive to be a responsible steward of the land and the creatures that roam it.

I studied Ecology and Evolutionary Biology at Michigan State University, and I spent several years working in wildlife and fisheries ecology research before landing at Bellwether Farm. This background underlies my dedication to regenerative agriculture and land stewardship.

I was lucky to grow up with farming. My father raises Angus cattle on our family farm in Hadley, Michigan, and he introduced me to concepts like rotational grazing and animal husbandry from a young age. When I was eight years old he gave me my first sheep, a pair of Suffolk lambs.